Posted on April 28, 2014 by chickenscratchfever

Tonight, on their third night in the coop, two of the three chicks walked up the ramp and into the hen house all on their own!

Once the birds saw Matt and I walking toward them, Gigi immediately flew up on the ramp and went right in. Nellie and Loretta weren’t as sure about this bedtime business, and hid under the hen house.

I knelt down (no easy feat!) and managed to get Nellie into my hands. She went in without a fight. But Loretta had other ideas. After trying to woo her for several minutes, I went back outside, and watched as Matt rewarded Gigi and Nellie with dried meal worms for making it to their bedroom.

Then I heard Loretta’s wings start to flap. She flew up on the ramp, and quickly scuttled through the hen house door to join her sisters.

Two out of three ain’t bad! 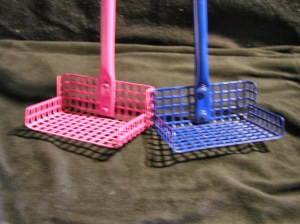 A closeup of the Stand-n-Scoop.

As we were closing up I noticed the bird droppings in the sand. Not a lot,  but I saw them, and wished for an easy way to clean them up. Right now I have a heavy duty kitty littler scoop that I use to sift the sand. But it requires me to bend over. Deep. (Uuugh!) And the run is 5 feet by 10 feet wide. That’s a lot of space to scoop for poop!

I thought of modifying a rake with wire mesh. I considered duct taping a litter scoop to a broom handle.

And then I discovered The Stand-n-Scoop!

It’s basically a sifting scooper with openings the size of wire mesh. With a LONG handle, so I don’t have to squat down and wonder how I’ll ever get up again. Awesome.

I’m pretty much sure it was the best $35 I ever spent.

What the cluck? Cancel reply