Posted on November 22, 2014 by chickenscratchfever 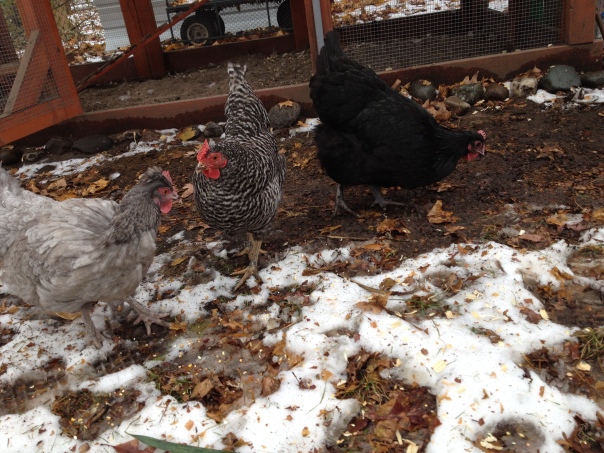 Gigi, Nellie and Loretta check out snow for the first time.

We had our first snowstorm of the year, bringing with it about 4 inches of snow, and temperatures that dipped into single digits overnight.

One morning I walked out to find my prized heated water fountain had frozen over. In the 13-degree weather, I quickly scooped out the ice from the water trough, and worried how the girls would have access to water while I was at work. All three were still in the hen house, and I imagined them huddled together, shivering in the cold.

But when i opened the hen house door, I found something closer to a slumber party. Loretta stretched her wings and strutted through the shavings on the floor. The girls were just fine.

After doing some more research, I discovered the heated water container (which was supposed to keep water from freezing down to zero degrees) tended to freeze if left in an open space that was vulnerable to the wind. So I made a controversial decision and moved the water and food into the hen house.

The electric water fountain (left) and the food are now in the hen house.

Chicken owners have many reasons for not having water and food in the hen house, if only to keep the area clean and free of spills. There also are concerns about the water increasing the humidity levels, which could contribute to frostbite.

But I have to say after a couple nights out of the elements, the electric fountain seems to be working its magic. It didn’t freeze over again. And the humidity levels remain unchanged.

Just in case the girls try to perch atop the fountain, I installed a chain suspended from the ceiling to keep it upright.

I don’t expect any crazy shenanigans from the girls, but it’s probably better safe than sorry.

← Catching up
Catching up: Moving with chickens →

What the cluck? Cancel reply